The U.S. Postal Service is under attack

The only federal agency explicitly authorized in the Constitution, the United States Postal Service is both the oldest, and the most beloved government institution. Created by the 2nd Continental Congress on July 26, 1775 with Ben Franklin as the first Postmaster General, the USPS has been the thread that binds American life together for over two centuries. But today, the 245th anniversary, the Postal Service is under attack.

COVID has shown how dependent we are on receiving mail and packages: our prescriptions, letters from friends and family, books, food, among many other items that are necessary to our health and well-being.

Across Utah’s 2nd Congressional District, residents are worried, particularly those who reside in rural areas. They fear losing their local post office. These concerns have a basis because private delivery companies do not go to every household in the U.S., instead often paying USPS to carry small packages to their final delivery points. In rural Utah, I have heard stories about missed packages and unexpected new mail commutes. When the town of Torrey’s satellite post office was shut down, for example, Wayne County residents in the area were left to pick up letters and packages in Bicknell. 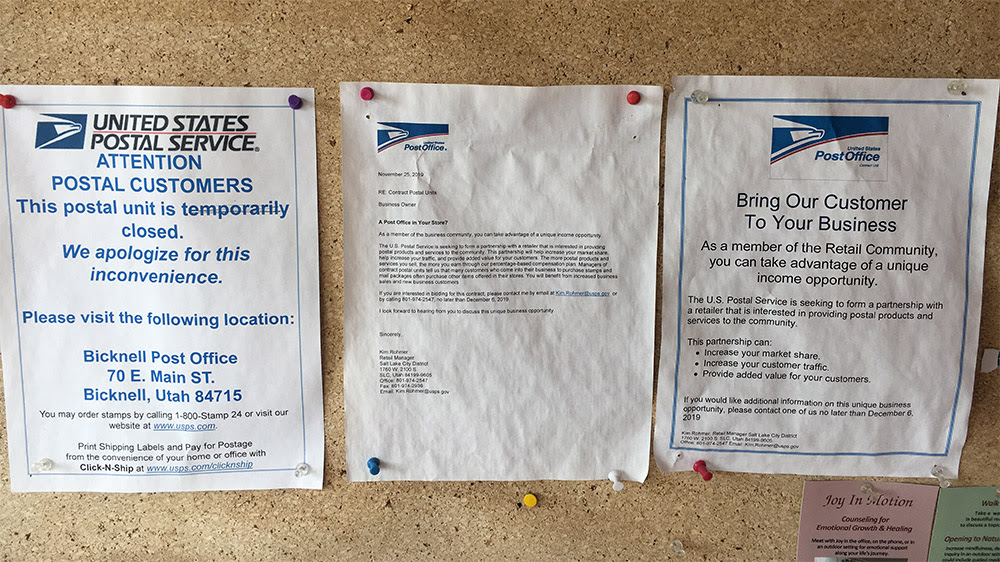 Today, the U.S. Postal Service is under attack by the Trump administration. Trump himself has called the USPS “a joke” because he says the agency will not raise prices for Amazon-related deliveries. (Let’s also recall: Trump really dislikes true billionaire Jeff Bezos and his Washington Post newspaper.) Despite being among the most popular institutions in our country, USPS’s financial situation is precarious—a prior law required USPS to prefund employee retirement at an excessive level. Democrats in Congress are trying to help stabilize the numbers but lack bipartisan support.

Moreover, partisan attacks on mail-in ballots by Trump and some others in the GOP are intended to call into question states’ mail-in ballot process and overall reliability, which is popular and efficient in Utah. This, of course, is ominous rhetoric given Trump’s recent remarks that he might not honor the outcome of the vote on November 3rd should he lose the election.

My position is straightforward: I am running to keep post offices open. It is a promise I have made in many small communities in CD2. And it is a promise I intend to keep if I am elected.

Over the last three months, my traveling campaign team and I have stopped at dozens of rural post offices. Many of them are included in the images in this message.

Local bulletin boards located at post offices are their own kind of community glue: with handwritten messages ranging from lost pets, to ATV repair services, book clubs, to bales of hay on sale, yoga classes, and various community events and notices.

Our campaign will be running a radio ad across the district that focuses on post offices. Here’s a preview.

Former Utah resident and writer, Edward Abbey, wrote, “But hell, I do like to write letters. Much easier than writing books.”

Not sure who said, “A letter won’t end up in the spam folder.”

What can you do to help save the United States Postal Service?

1. Buys Stamps! Buy Postcards! You can purchase online and have them delivered to your door, along with the rest of the mail!

IDEA: Use your new stamps and postcards to write to CD2 friends about Weston for Congress. Personal outreach through letters and postcards is the most effective way to get the word out.

2. Call your representatives in Congress and tell them to support stimulus funding. Tell them they must commit to supporting the USPS and a national vote by mail campaign.

IDEA: Use Resistbot to send messages directly to your representatives in minutes.

IDEA: Circle this date on your calendar: OCTOBER 20. With the recent mail slowdown implemented by the new Trump-selected Postmaster General, your mail in ballot should be postmarked 2 weeks before election day to ensure your vote is counted.

4. Get educated. Here are some links to get started.

IDEA: Read the whole thread below. It’s a quick education on the U.S. Postal Service. 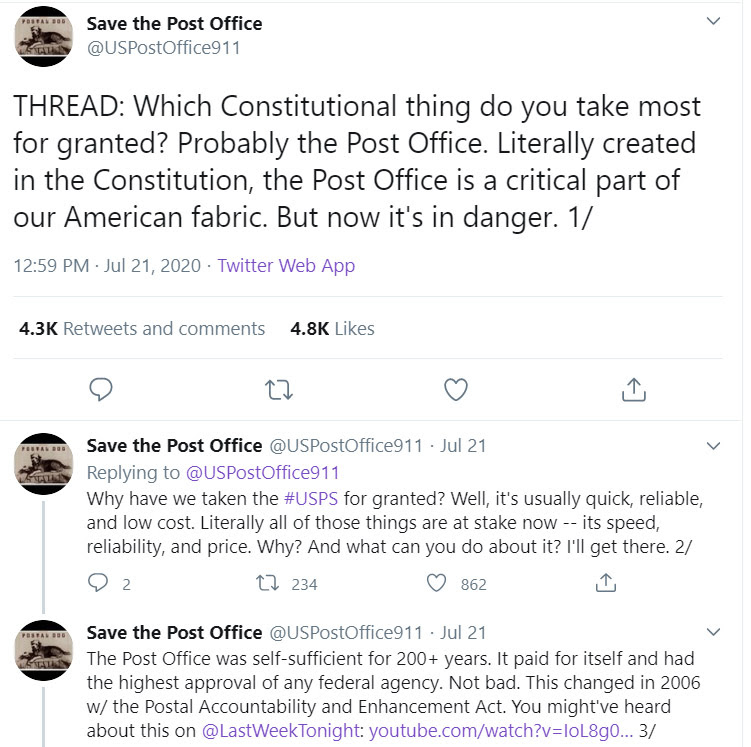 Please join me in supporting our post offices. By registering to vote, buying stamps, calling your current representatives in Congress.

Your donations will help us get more messages out on the radio. Working together, we can reinforce an institution that is an intrinsic part of our national story and has been with us since the beginning. Getting mail the old-fashioned way, via blue-and-white trucks delivered at PO Boxes and to home addresses, connects us—no matter our ZIP Codes—this election.

This is a fight worth fighting. This is a winning issue in CD2.

Thank you for your time. And please send us a photo of your local post office if you get a chance.